That’s because there are really only two halves to the formula of office lease economics. True, each of those halves does include multiple moving parts. But for this discussion, we can take a higher altitude perspective that simplifies the equation to the two big halves.

The other half is the “construction cost”, referring to the cost to create the interior office environment that a given company needs for its use. That cost is usually itself reduced to two categories: layout and fit & finish. It might be most useful to use the following definitions of fit and of finish: fit refers to the quality of the construction itself, whereby expert craftsmanship costs more than the opposite; and finish refers to the caliber of the materials that are used for the construction, whereby a solid piece of wood, let’s say mahogany, generally costs more than a mahogany veneer.

The cost to create what an office tenant needs is a burden on the economics of the office lease transaction, just as the cost to manufacture a consumer product burdens the economics of selling that product. This is the case from the perspective of landlord and tenant, as it is for manufacturer and consumer.

There’s another parallel between the worlds of consumer products and office leasing. I’m referring to the concept of recycling. We all may by now have been involved in the complexities of recycling as it relates to the world of consumer goods. For example, do you use “single stream” recycling or do you keep multiple recycling containers in your garage or under your kitchen sink? It takes time and effort to recycle in a way that delivers to the manufacturing sector high caliber raw materials, referring to pure, rather than contaminated, recycled plastic, glass, paper, etc. 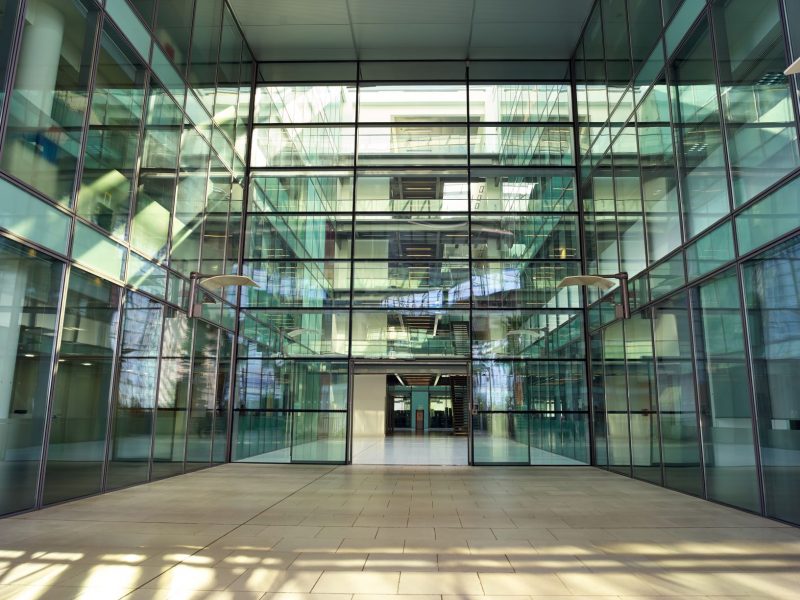 Let’s jump back to office leasing and sustainability.

When it comes time to specify floor covering, consider carpet tiles, instead of broadloom. The former might cost around 10% more than the latter. That’s until you have to rip up a whole room because someone spilled coffee on the carpet in the middle of the room. The alternative is to replace only the stained carpet tile with a piece from your attic stock, left over from the initial installation of your newly carpeted office space using a carpet tile product.

And, when it comes time to specify paint, a low VOC (volatile organic compounds) paint is better for the environment and for the living organisms that are your valued colleagues. Yes, there are cost implications, but they’re relatively minor.

Certain uses of office space require a layout that’s more expensive to build than other uses. Certain uses also require a higher quality of fit & finish than other uses. For example, a recording studio costs more to build than a psychiatry office, which costs more than an accounting or insurance office – with regard only to the level of soundproofing that these respective uses require. A layout with a lot of private offices costs more to build than does an “open plan” layout, if only because the former layout requires more drywall, studs, and doors, frames & hardware, than the latter.

But this article isn’t about those differences.

It’s about a more fundamental interest in recycling that all building owners and managers have for the strongest reason. And that interest should be shared by all tenants, for the same reason, no matter what their business use and what their needed layout and level of fit & finish might be. That reason is not concern for the planet or for people. It’s concern for profit. And that makes the reason the most sustainable.

This opportunity for sustainability brings into perfect alignment the interests of parties that are otherwise in structural opposition. After all, landlords want a higher rent, while tenants want a lower rent.

“Existing conditions” is the term for a layout, or any improvements, that are already in an office space. Interest in reuse of existing conditions should be the place to start any office leasing project, regardless of whether the office space will be used by a national bank with seemingly unlimited funds or by a local charity with very limited funds.

In office leasing, there are norms to which all parties can look to understand the dynamics of such transactions. Chief among them is the way in which the build-out of the tenant’s needed layout, which is based on that tenant’s “program of requirements” in architect parlance, is handled. Is it going to be built from a raw condition, necessary because there are no existing improvements or because the existing conditions have no utility to that tenant?

Or are there existing conditions that can be reused, whether in part or more fully?

In the former case, the construction expense will be greater than in the latter case.

One of the conventions to which I referred above, is the expectation that, in office lease transactions, landlords are expected to invest some of their own money to put a lease in place. Leases increase the value of their building by creating an income stream in the form of tenant rent payments over the term of the lease.

The construction cost to deliver the tenant’s required layout is typically the largest of the costs that are referred to as the landlord’s “transaction costs”.

If the construction cost is lessened by reuse of any amount of existing conditions, then there’s more room for the other typical components of the transaction costs to be adjusted. Typically, the second largest component of transaction costs is free rent, which is also called rent abatement. Free rent lowers a tenant’s occupancy cost.

Such cases are an ideal transaction that’s a win/win for both the landlord and tenant. And it doesn’t hurt that the planet wins at the same time.

Every assignment that MAP Real Estate handles starts with a laser focus on understanding our client’s program of requirements. Then we identify the best alternatives to satisfy that program at the lowest possible construction cost, specifically by reusing existing conditions to the greatest degree desirable from our client’s perspective.

The resulting office lease is made better for both tenant and landlord by this sustainable approach.